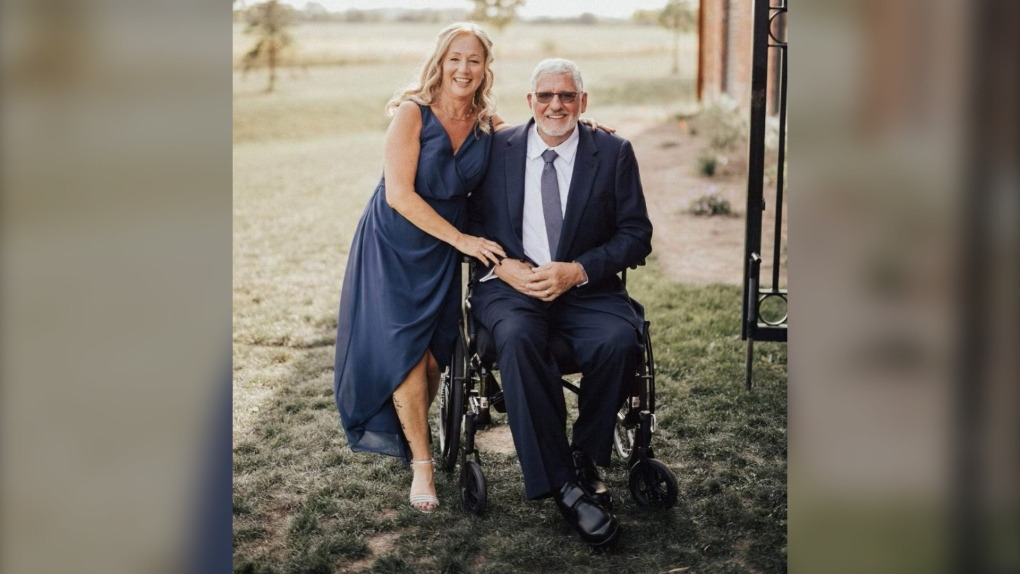 An Ontario man is struggling to get around in Chile after Air Canada forgot his customized wheelchair in Toronto.

“Jim cannot move without the wheelchair,” his stepdaughter Wendy Elliott told CTV National News from Toronto. “I think this is just unacceptable.”

Jim Hamilton and Elliott’s mother Kathie Hamilton departed Toronto late Sunday for Santiago, Chile, for a month-long trip that includes a 16-day cruise. Avid travellers, the couple had been looking forward to their first vacation since Hamilton suffered a serious stroke in May 2021, which left him completely paralyzed on his right

side. Elliott says the stroke “turned their whole world upside down in an instant.”

“My mom had put a lot of care and preparation into this trip,” Elliott explained. “She actually was working with someone who runs a travel agency that specializes for people with accessibility needs. So, she had really done all of her due diligence to ensure that everything was going to go smoothly.”

Hamilton was taken right to the door of the plane in his wheelchair, which was then supposed to be gate-checked, like when large carry-on luggage is put into the cargo hold right before a flight. But when the couple arrived in Santiago on Monday morning after the 10-and-a-half-hour flight, they learned that the wheelchair was still in Toronto.

“We were the last people off the plane,” Kathie Hamilton told CTV National News from Chile. “And when I stepped out that door and his chair was not there, you have no idea… I mean, it’s his legs.”

Elliott was shocked to hear what happened.

The couple is travelling from Santiago to Vina del Mar, a more than 120-kilometre drive, where their cruise departs on Friday. Elliott says her mother is struggling to help Hamilton in and out of the “uncomfortable” temporary wheelchair they were provided at the airport when they arrived. Costing more than $5,000, Hamilton’s wheelchair had been customized for his height, weight and particular mobility needs.

“He needs this chair to get out of bed in the morning, to function throughout the day, to go to the washroom, to have a shower, to get back into bed at night—he needs it for everything,” Kathie Hamilton said. “All I want is his chair. I don’t even want a rental. I want his chair because no rental is going to have all the specifications that his chair had.”

Without it, she says, “it’ll ruin the whole cruise.”

Air Canada has promised that Hamilton’s wheelchair will be on a Tuesday night flight, which will arrive in Santiago on Wednesday morning. Elliott hopes the airline will be able to get the wheelchair to her stepdad in time.

This is not the first time Air Canada has had issues delivering a wheelchair. In September 2022, a Toronto woman’s motorized wheelchair was badly damaged on a flight to Israel, and in late 2021, a Toronto man’s wheelchair was sent from Greece to Germany instead of Canada, only to arrive damaged in Toronto five days later. A B.C. woman was also forced to deplane in July 2022 after Air Canada said her motorized wheelchair was too big to put in the cargo hold. Passengers have meanwhile reported waiting for lost baggage for weeks or more, including luggage containing cancer medication. Similar issues have been reported with other airlines in Canada, like WestJet.

Maayan Ziv is a Toronto entrepreneur and disability activist whose $30,000 wheelchair was damaged by Air Canada in September as she travelled to Tel Aviv for an accessibility conference. Broken beyond repair, a replacement only arrived yesterday.

“I was stuck and it took months before any resolution actually resulted,” Ziv told CTV National News on Tuesday. “The reality is that today, people with disabilities and our mobility devices are treated like luggage. There is no distinction between someone losing a suitcase and someone’s health, mobility and independence being literally stripped from them. And that’s what happens when an airline is so negligent and loses or breaks a wheelchair or any other mobility device.”

Ziv says an average of 29 mobility devices are damaged or lost by airlines each day.

“This is happening every day to people everywhere and nothing has been done to make it so that this doesn’t happen anymore,” she said. “The airlines’ approach is to pay away the damage afterwards, and there is zero recognition of the impact that is being had on people’s lives. It’s devastating.”

In a statement to CTV National News, Air Canada confirmed that Hamilton’s wheelchair would be flown to Chile on Tuesday night.

“We fully appreciate the importance of mobility devices to their customers and have processes in place to ensure they travel safely with their owners, and we are reviewing why that did not occur in this case,” a spokesperson said. “We are following up with the customer directly to apologize and address their concerns and, as part of this process, we did immediately offer the customer a $300 goodwill gesture.”

To Elliott, $300 is no consolation for losing an essential mobility aid.