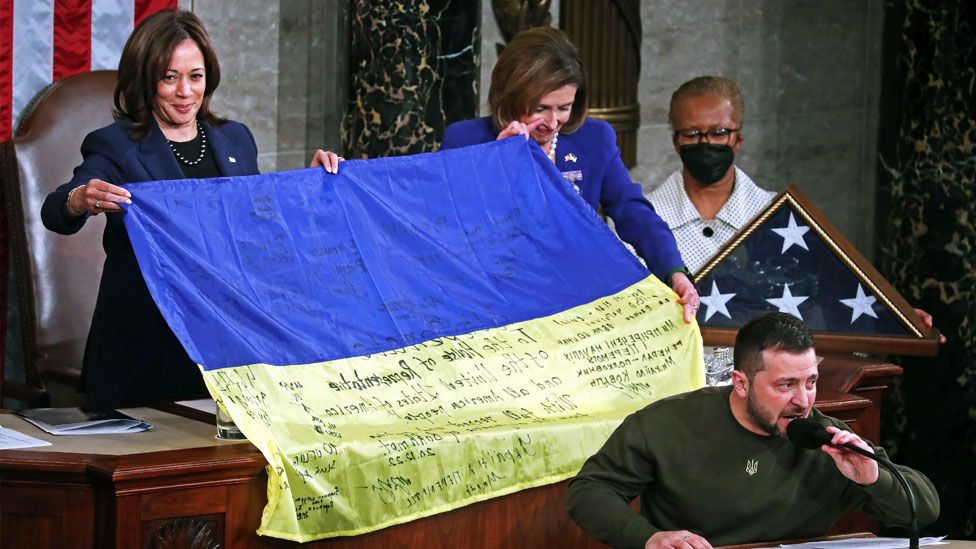 Russia has strongly criticised the visit to Washington by Ukraine’s Volodymyr Zelensky, accusing the US of fighting an indirect war against it.

President Joe Biden has pledged $1.85bn (£1.45bn) of military aid for Ukraine – including an advanced missile system to help guard against Russian attacks.

In a defiant address to US lawmakers, Mr Zelensky welcomed the assistance.

But Russia’s US ambassador said these “provocative actions” would lead to an escalation with severe consequences.

Anatoly Antonov told Russian state media that Moscow was “trying to appeal to common sense at all levels”, but talk of delivering the Patriot missile system to Kyiv was “deeply disturbing”.

Moscow has complained that no calls for peace were heard during President Zelensky’s trip to Washington – with spokesman Dmitry Peskov describing this as proof that the US was fighting a proxy war with Russia.

Mr Peskov added that delivering Patriot missiles would not prevent Russia from “achieving its goals during the special military operation”.

“The talks in Washington have shown that neither Ukraine nor the United States is seeking peace. They are simply intent on continuing the fighting,” said Russian foreign ministry spokesperson Maria Zakharova.

Russian commentators have echoed this – repeatedly accusing the US of “pumping Ukraine full of weapons”.

Some media reports from Moscow ridiculed the Ukrainian leader – with state TV’s Channel One comparing him to a stripper begging for money. On Wednesday, he was likened to a toilet brush.

Marking his first foreign trip since the start of the invasion, Mr Zelensky told Congress his country was “alive and kicking” and would never surrender to Moscow.

As well as the $1.85bn package that has already been announced, another $45bn of US emergency assistance is currently before the Senate.

Mr Zelensky expressed hope this extra funding would be approved, to “help us to defend our values and independence”.

But there are signs that US support is likely to face greater political scrutiny. Republican support for continued assistance has been eroding.

In a survey conducted in November, just over half of Republican voters supported aid to Ukraine – down from 80% in March.

The party, which will take control of the House of Representatives in January, has warned it will not write a “blank cheque” for Ukraine.

But President Biden has vowed to stick by Ukraine “for as long as it takes”.

Mr Zelensky, who travelled on a US Air Force jet from the Polish city of Rzeszow, said that “regardless of changes in the Congress”, he believed there would be bipartisan support for his country.

He made his plea in emotive terms before a joint session of Congress – a speech that was interrupted 18 times with standing ovations by nearly all members of Congress, with the exception of some Republican lawmakers who did not clap.

Speaking in English, he told them his country was still standing “against all odds” and predicted “a turning point” in the conflict next year.

To illustrate the brutality of the war, Mr Zelensky evoked US troops fighting the Nazis during World War Two.

“The Russians’ tactic is primitive. They burn down and destroy everything they see. They sent convicts to the front lines, to the war. They threw everything against us, similar to the other tyranny, which in the Battle of the Bulge threw everything it had against the free world.

“Just like the brave American soldiers who held their lines and fought back Hitler’s forces during the Christmas of 1944, brave Ukrainian soldiers are doing the same to [Russian President Vladimir] Putin’s forces this Christmas,” he said. “Ukraine holds its lines and will never surrender.”

Concluding his speech, Mr Zelensky presented Congress with a battle flag signed by the defenders of Bakhmut, a frontline city in the east of Ukraine that he visited on the eve of his Washington trip.

At a joint news conference, Mr Biden told reporters he was “not at all worried” about holding the international coalition together.

Despite concerns some allies may be feeling the strain of the conflict’s cost and disruption to global food and energy supplies, the US president said he felt “very good” about the solidarity of support for Ukraine.

As Ukraine’s most important ally, the US has already committed $50bn (£41bn) of humanitarian, financial and security assistance – far more than any other country.

On his way home from Washington, Volodymyr Zelensky stopped in Poland where he met Polish President Andrzej Duda, one of his strongest allies.

The two discussed the US visit as well as their “strategic plans for the future”, Mr Zelensky said.

Since Russia invaded Ukraine on 24 February, the US military estimates that at least 100,000 Russian and 100,000 Ukrainian soldiers have been killed or injured, along with some 40,000 civilian deaths.

The UN has recorded 7.8 million people as refugees from Ukraine across Europe, including Russia. However, the figure does not include those who have been forced to flee their homes but remain in Ukraine.