Secret train and a government plane: how Zelenskiy made his high-security trip to the US 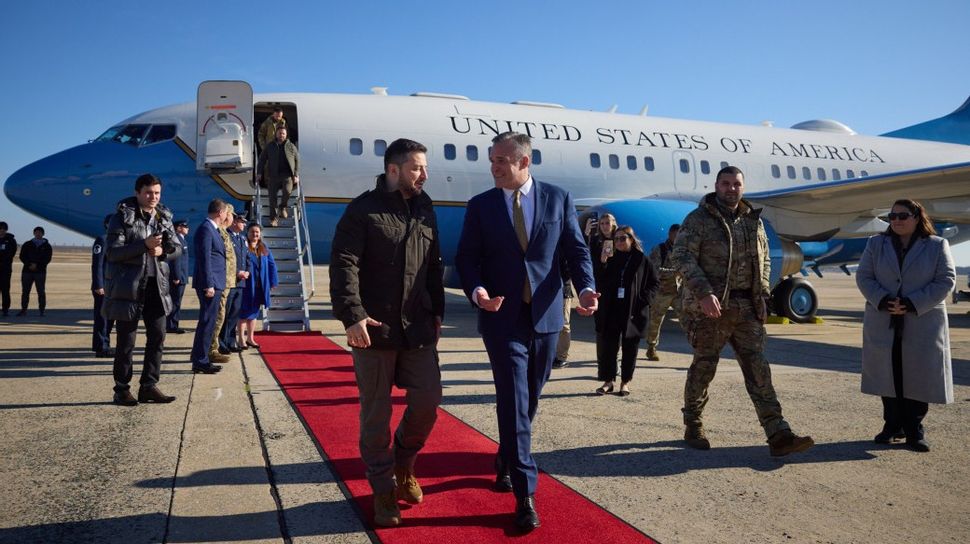 Volodymyr Zelenskiy’s surprise visit to Washington – the Ukrainian president’s first overseas trip since the Russian invasion 300 days ago – started with a secretive train ride to Poland late on Tuesday.

The next morning he arrived in the southern Polish city of Przemysl, where he was spotted at the train station, according to footage from private broadcaster TVN, along with the US ambassador to Ukraine, Bridget Brink, who accompanied him.

Zelenskiy’s visit had been planned for days and organised in secret because of concerns about his safety, but details were tweeted on Tuesday by a reporter from US-based newsletter Punchbowl News.

In Poland, Zelenskiy boarded a US government plane which landed at about noon EST on Wednesday at Joint Base Andrews in Maryland near Washington.

He traveled by motorcade to Blair House, the presidential guest house along Pennsylvania Avenue, and after freshening up from his trip went to the nearby White House, where he was greeted by President Joe Biden and the first lady, Jill Biden.

Rather than a suit and tie, Zelenskiy wore his signature army green sweater and cargo pants, a reminder that he came directly from a war zone.

There was no “mathematical formula” for the right day for Zelenskiy to make this trip, a senior Biden administration official told reporters late on Tuesday, but added it would be “an important injection of momentum and sustenance” to US and allied support as winter sets in.

The administration consulted closely with Zelenskiy on the “security parameters” of him being able to leave Ukraine and visit the US briefly and return, said the official, speaking on the condition of anonymity.

“Of course, it ultimately was his decision to make. He concluded that those security parameters were met. What he needed, we agreed with that, and so we are executing accordingly,” the official said.

At the White House, Zelenskiy held talks with Biden and his top national security aides, before participating in a joint news conference with Biden in the East Room, which was decked out with holiday decorations.

Zelenskiy’s less than 12-hour visit came together largely over the past two weeks after the two leaders discussed it in an 11 December phone call. Three days later the White House extended a formal invitation, the US official said. Zelenskiy accepted the invitation last Friday and the visit was confirmed on Sunday.

At their news conference, Biden said it was important to have Zelenskiy visit “to look you in the eye”.

“President Zelenskiy, I’m honoured to welcome you back to the White House,” said Biden.