Putin vows to ‘knock down’ US Patriot missiles supplied to Ukraine 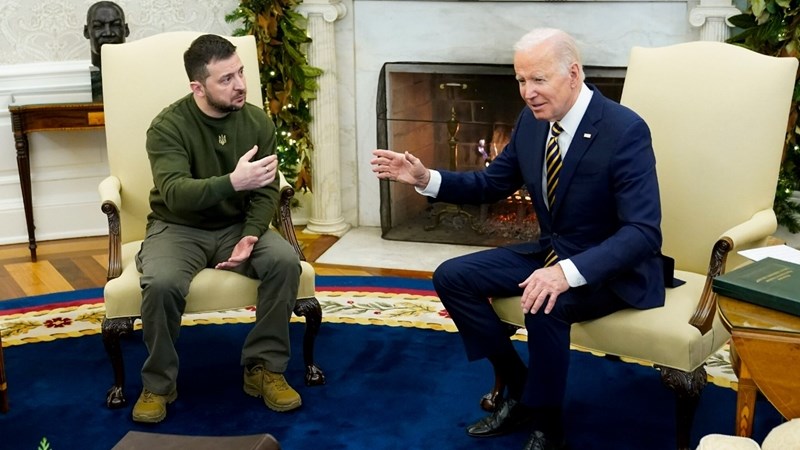 The Kremlin says US supplies of Patriot missiles to Ukraine, agreed upon during Volodymyr Zelenskiy’s trip to Washington, will not stop it achieving its military goals.

Vladimir Putin dismissed the weapon as old and said Russia’s missile systems would be able to shoot it down. “The Patriot air defence is outdated. An antidote will always be found … Russia will knock down the Patriot system,” he declared on Thursday.

The Russian president said “all armed conflicts end through negotiations” – implying that Ukraine would ultimately be forced to cede territory in exchange for peace. “The sooner this becomes clear to Kyiv, the better,” he added.

In a call with reporters, Putin’s spokesperson, Dmitry Peskov, said there were no signs from Zelenskiy’s meeting on Wednesday with the US president, Joe Biden, that Ukraine was ready for talks.

Peskov suggested the US was fighting a proxy war with Russia and was determined to keep going “to the last Ukrainian”.

During his first foreign trip since the invasion began in February, the Ukrainian president gave a defiant address to a joint session of the US Congress. He said his country would never give in to Russian aggression and that the White House’s continued support was key to ultimate victory.

Zelenskiy received multiple standing ovations as he stressed that the outcome of the war would determine the future world order. “It will define whether it will be a democracy – for Ukrainians and for Americans – for all,” he said. He predicted that 2023 would be a “turning point” in Ukraine’s struggle to liberate its territory.

Biden announced $1.85bn (£1.54bn) in new military assistance to Kyiv, including the delivery of a Patriot missile battery system. Zelenskiy said this would significantly enhance Ukraine’s air defence shield and prevent Russia from hitting critical infrastructure – “our cities, our energy”.

The success of Zelenskiy’s US trip poses a strategic dilemma for Putin. The US-led, anti-Kremlin coalition is holding up, more than 10 months into the war, contrary to Moscow’s expectations. The latest round of American security assistance will make it hard for Russia to advance in the spring, despite an influx of fresh troops after mobilisation.

On Thursday, Russia’s defence minister, Sergei Shoigu, inspected frontline positions in occupied Ukraine, according to the RIA Novosti state media agency. A video showed him travelling in a convoy of Z-marked armoured vehicles, touring a barracks and talking to soldiers.

Shoigu congratulated soldiers and said: “Everything will be fine.” There was no evidence that the footage was shot in Ukraine, with only muddy fields in the background. Shoigu did not appear to be near the eastern city of Bakhmut, visited by Zelenskiy on Tuesday and the scene of bitter combat.

Ukraine’s ability to launch attacks on high-value Russian targets was demonstrated on Wednesday when one of Putin’s close political allies was seriously injured. Dmitry Rogozin, Russia’s former deputy premier and a hawkish ambassador to Nato, was wounded on a visit to the occupied city of Donetsk.

Russian media reported that he had been sitting in the Shesh-Besh restaurant in the Leninsky district when it was shelled. He was transported back to Russia and taken to hospital in Rostov-on-Don, together with two other victims, his assistant said. He was reportedly waiting for an operation.

In Kyiv, the general staff claimed that Moscow had lost 100,400 troops since late February, as well as more than 3,000 tanks, nearly 6,000 fighting vehicles and 283 planes. The figures are difficult to verify independently. But there is no doubt that the Russian casualty rate is high.

Zelenskiy, meanwhile, went back to Ukraine on Thursday on a US government Boeing aircraft. Elaborate security precautions were taken to protect him on his trip to and from the US. German spy planes and a US air force F-15 fighter jet escorted him over western airspace and he reached eastern Poland by train.

In a video message, Zelenskiy said he was returning home with “good results”. He added: “We are bringing to Ukraine, to Donbas, to Bakhmut and to the south, the decisions that our defence forces have been waiting for.”

The Ukrainian president’s visit lasted less than 12 hours. He had talks with Biden and his most senior national security aides, took part in a joint press conference in the White House’s festively decorated East Room and, on Capitol Hill, met lawmakers including Nancy Pelosi, the outgoing speaker of the House of Representatives.

Despite the overall success of the visit, Zelenskiy did not get everything he wanted. Congress failed to agree a large spending bill, which included nearly $50bn (£42bn) in extra funding for Ukraine, because of a dispute over immigration policy. And the Fox News host Tucker Carlson criticised Zelenskiy for wearing green fatigues to Congress.

There was genuine personal chemistry between Biden and Zelenskiy, but also subtle disagreements over future arms deliveries. In his speech, the Ukrainian president said there should be “no taboos in our relationship”. He said Kyiv did not expect US soldiers to take part in the war: “Ukrainian soldiers can perfectly operate American tanks and planes themselves.”

So far, the Biden administration has not provided longer-range artillery, tanks and fighter jets that would allow Ukraine to strike targets deep inside Russia. The White House worries that these advanced weapons could escalate the situation and bring the US closer to a direct conflict with Moscow. Kyiv disagrees.

There are also unresolved questions as to what may constitute a Ukrainian victory. On Wednesday, Zelenskiy said he had discussed a 10-point “peace formula” with the US president, which calls on Russia to leave all Ukrainian territory and demands reparations from Moscow, as well as Nuremberg-style trials for Putin and his generals.

Washington has made it clear that it is up to Kyiv to decide what victory means. So far, it has not explicitly endorsed Zelenskiy’s pledge to recapture the Crimean peninsula, annexed by Russia in 2014.