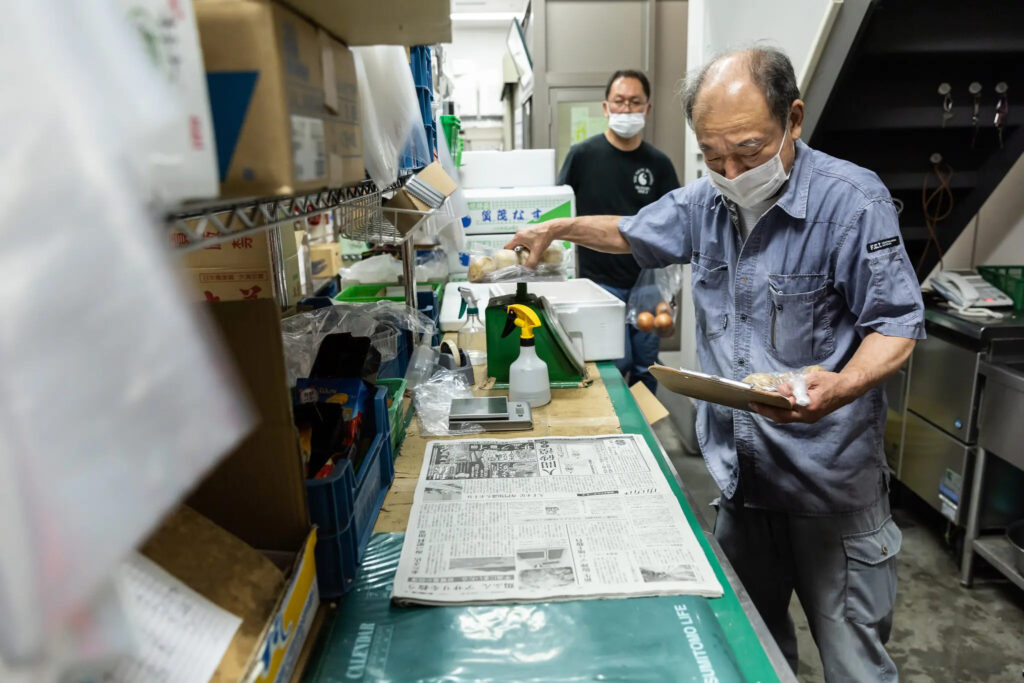 TOKYO — All Yoshihito Oonami wants to do is retire and give his worn body a rest.

Instead, every morning at 1:30, Mr. Oonami, 73, wakes up and drives an hour to a fresh produce market on an islet in Tokyo Bay. While loading mushrooms, ginger root, sweet potatoes, radishes and other vegetables into his car, he frequently lifts boxes that weigh more than 15 pounds, straining his back. He then drives across Japan’s capital city, making restaurant deliveries up to 10 times a day.

“As long as my body lets me, I need to keep working,” Mr. Oonami said on a recent morning, checking off orders on a clipboard as he walked briskly through the market.

With populations across East Asia declining and fewer young people entering the work force, increasingly workers like Mr. Oonami are toiling well into their 70s and beyond. Companies desperately need them, and the older employees desperately need the work. Early retirement ages have bloated the pension rolls, making it difficult for governments in Asia to pay retirees enough money each month to live on.

Demographers have warned about a looming demographic time bomb in wealthy nations for years. But Japan and its neighbors have already started to feel the effects, with governments, companies — and most of all, older residents — grappling with the far-reaching consequences of an aging society. The changes have been most pronounced in the workplace.

Working at his age “is not fun,” said Mr. Oonami, rummaging through a box of carrots. “But I do it to survive.”

For some older people, the demand for workers has given them new opportunities and leverage with employers, especially if they felt pushed out by early retirement ages in favor of younger workers. Now, the question these aging nations are grappling with is how to adapt to the new reality — and potential benefits — of an older work force, while ensuring that people can retire after a lifetime of work without falling into poverty.

In East Asia, where populations are graying faster than anywhere else in the world, there is an urgent need for more flexibility. Japan, South Korea and China have all been forced to experiment with policy changes — such as corporate subsidies and retirement adjustments — to accommodate population shifts. Now, with the rest of the world not far behind, many nations will likely look to Asia for lessons in how to respond to similar crises.

“Are you just going to panic about it and run around being frightened?” said Stuart Gietel Basten, a professor of social science at the Hong Kong University of Science and Technology. “Or do you say, ‘It’s very complex, and we will have to adapt our lives and institutions in lots and lots of different ways?’”

Adapting to the needs of older workers.
Long before Mr. Oonami started delivering vegetables, he tried working in an office and as a cabdriver. Eventually, he decided he preferred the solo life of a truck driver. That decision consigned him to perennial contract work rather than the more traditional path taken by many early postwar employees in Japan, with lifelong jobs of guaranteed salaries, regular promotions and corporate retirement benefits.

As a truck driver, Mr. Oonami would often lift heavy cargo, which became unsustainable for him after he turned 50. His doctor told him that so much lifting had worn down the cartilage in his spine. “Moving the boxes was very rough for my body,” Mr. Oonami said.

He switched to smaller delivery jobs and landed a contract at the produce market about 15 years ago. Yet even as he approached Japan’s traditional retirement age of 60, Mr. Oonami could not afford to stop working. Having held contract gigs his entire career, he is only eligible for a basic national pension — about 60,000 yen a month, or about $477 — not enough to cover his daily expenses.

Japan isn’t the only country in East Asia where older people feel they have no choice but to keep working. In South Korea, with a poverty rate among older people close to 40 percent, a similar proportion of those 65 and older are still working. In Hong Kong, one in eight older residents works. The ratio is more than a quarter in Japan — compared to 18 percent in the United States.

In Japan and South Korea, temporary job agencies and unions have formed to support these older laborers. While many of them must work out of economic necessity, employers have also become more reliant on them.

To cope with what demographers call “super aging societies,” policymakers in East Asia initially focused on trying to spur births and tinkering with immigration laws to shore up work forces. Such measures have done little to alter the aging trend line, as fertility rates have plunged and many countries have resisted large-scale immigration plans.

That has left employers desperate for workers. In Japan, for example, surveys show that as many as half of companies report shortages of full-time workers. Older workers have stepped in to fill the gaps. “We have so much unused and untapped working capacity,” said Naohiro Ogawa, a visiting fellow at the Asian Development Bank Institute.

Koureisha is a temporary agency in Tokyo where job listings specify that applicants must be at least 60 years old. Fumio Murazeki, the president, said he believed employers were growing more receptive to hiring older workers. “People who are over 65, or even up until 75, they are very active and healthy,” he said.

At Tokyu Community, a property management company for apartment complexes in Tokyo, almost half the staff is 65 or older, said Hiroyuki Ikeda, head of human resources. With a salary of just 2,300,000 yen a year — less than $17,146 — the jobs do not appeal to younger workers, while older people are willing to accept the low pay to supplement their pension income.

The Japanese government now provides subsidies to small- and medium-sized companies that install accommodations for older workers, like additional railings on staircases or extra rest areas for workers.

Gloria, a company outside of Tokyo that produces uniforms for policemen, abolished its mandatory retirement age six years ago because of a labor shortage. To assist its older workers, the company built a ramp to the front door and moved electrical wires previously strung across the factory floor to the walls and ceilings to prevent employees from tripping.

On its website, Gloria says it wants to “become a company where people can work until they themselves decide they want to quit.”

Aikawa Unsou, a delivery company, installed grip handles in its trucks to help drivers climb into and out of vehicles. “The work environment has to be aging-friendly,” said Feng Qiushi, an associate professor of anthropology and sociology at the National University of Singapore. “They need to provide training opportunities and provide flexible retirement opportunities.”

Full-time, stable employment is reserved for the relatively young in these countries, leaving many older workers to engage in precarious, low-wage contract jobs after being forced out of their long-term employment by low retirement ages. Once they retire, state-backed pensions usually do not cover basic living expenses. In Japan, China and South Korea, the average monthly pension is under $500. And unlike in the United States, 401(k)s are not yet widely available in the region.

To help fend off a labor shortage and keep up with pension payments, governments are trying to nudge retirement ages higher, which has set off some resistance. In China, “people get angry,” said Sheying Chen, a professor of public administration and social policy at Pace University in New York. “They say, ‘I worked full-time and made it to retirement age — you want me to work more?’”

More often, it is employers who balk at legislative efforts to lift retirement ages. With the seniority-based pay systems that are prevalent across East Asia, companies want to push older employees off the payroll, not extend their time on the job.

“Even if older people are equally productive, if you’re forced to pay them more because they have been hanging around longer, their cost-effectiveness is going to be lower,” said Philip O’Keefe, a director at the Centre of Excellence in Population Aging Research in Sydney, Australia.

In the absence of more government support, some older people are forging their own working opportunities. Li Man, 67, was forced to retire at 45 from a job at a state-owned refrigerated warehouse in Beijing. The government told her it was too dangerous for her to continue working in freezing temperatures.

Ms. Li figured she could still work “in the prime time of my life” to afford her daughter’s tuition and living expenses at film school in California. She started babysitting and selling homemade dishes like braised fish and stir-fried pork with squash to neighbors.

“Going back to work has made me less anxious,” said Ms. Li. Yet lately, she is plagued by back pain and high blood pressure. “Maybe it’s time to retire,” she said.

For Mr. Oonami, the vegetable delivery man in Japan, retirement is just a dream. A twice-divorced father of three, he lives with his youngest son. He has no savings and said he takes vitamin supplements to keep healthy. “Right now,” he said, “I can’t even imagine a life where I am not working.”

Given his early schedule, he has little time for hobbies. When he arrives home in the afternoon, Mr. Oonami usually fixes himself a stir-fried dinner, feeds his two Maltese dogs and falls asleep by 6 p.m.

“You shouldn’t work until the end.”
Eiji Sudo, 69, wasn’t quite ready to retire.

He had spent more than four decades working maintenance and construction jobs at Tokyo Gas, a natural gas supplier. He retired at 60, and the company offered him a four-day-a-week contract at about half his peak salary. Once he hit 65, though, the company would no longer extend his contract, he said.

To earn enough money to travel comfortably with his wife, Kazue, Mr. Sudo wanted to keep working. He signed up with the Koureisha agency and now works as a contractor for Asuqa, a gas pipeline company in Tokyo. Three days a week he drives to neighborhoods where the company is installing or repairing gas lines, knocking on doors to inform residents of upcoming construction work.

About one in 10 workers at Asuqa are 65 or older. Most of them officially retired at 60 — the company’s retirement age — and subsequently accepted contract roles at reduced pay. “We have always had to supplement by rehiring older workers,” said Kazuyuki Tabata, an Asuqa manager.

Mr. Sudo said he enjoys traveling across multiple suburbs and meeting new people. It keeps him curious and engaged, he said, and is better than playing golf every day. “Every person is different,” he said. “It is good for me.”

His wife, who faithfully packs him a homemade lunch when he works, appreciates that he gets out of the house: It means they both have “our ‘me time,’” she said. Still, “it would be very sad for anyone to die working,” she added. “You shouldn’t work until the end like that.”