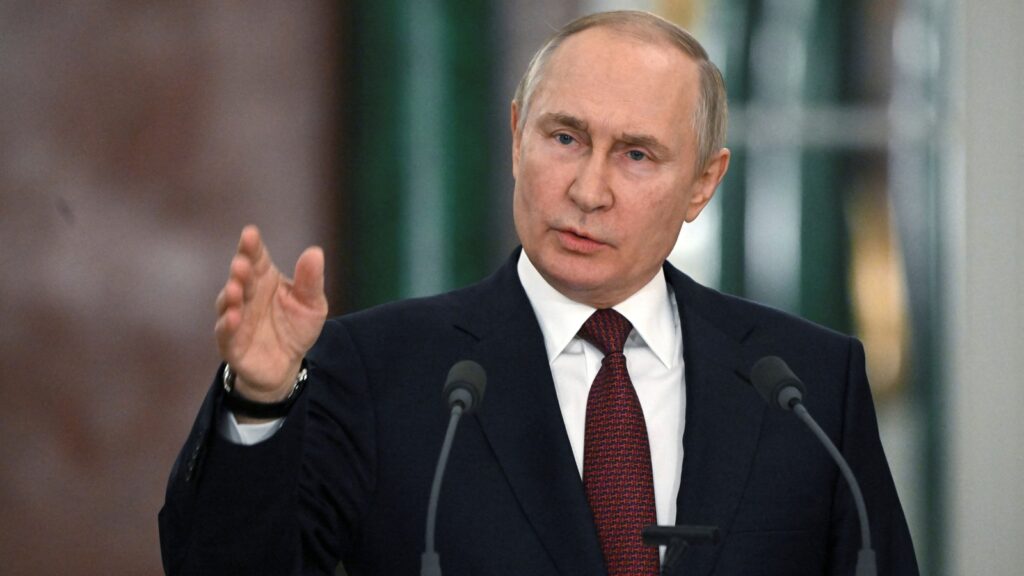 Russian President Vladimir Putin has described the US Patriot air defence system to be delivered to Ukraine as outdated, adding the Russian military knows how to counter them.

The US announced a new $US1.85 billion ($2.75 billion) military aid package during a visit to the White House by Ukraine President Volodymyr Zelenskyy on Thursday.

The package includes one Patriot battery — deemed to be one of the most advanced US air-defence systems, offering protection against attacking aircraft as well as cruise and ballistic missiles.

“They say they may send Patriot there, fine, we will crack the Patriot too,” Mr Putin told reporters, adding that the deliveries would only extend the fighting.

“Those who do it do so in vain, it only drags out the conflict.”

Mr Putin also said stockpiles of Soviet-made weapons that former Warsaw Pact NATO members have been providing to Ukraine “are nearing exhaustion”, and claimed Ukrainian military industries have been effectively knocked out.

He said Russia was capable of increasing its own weapons output.

Mr Putin acknowledged Russia had experienced shortages of some weapons, specifically drones and loitering munitions, but said it would build up their production.

Mr Putin reaffirmed Russia was ready for talks with Kyiv on ending the conflict, but signified Ukraine’s refusal to negotiate.

“One way or another, all armed conflicts end with talks,” he said.

“The sooner this understanding comes to those who oppose us the better. We never rejected the talks.”

The White House said the Wagner Group, a private Russian military company, took delivery of an arms shipment from North Korea to help bolster Russian forces in Ukraine, a sign of the group’s expanding role in the conflict.

John Kirby, spokesperson for the White House National Security Council, said Wagner was searching around the world for arms suppliers to support its military operations in Ukraine.

“We can confirm that North Korea has completed an initial arms delivery to Wagner,” he told reporters, adding that the package included infantry rockets and missiles.

North Korea’s foreign ministry also denied reports it offered munitions to Russia, calling it an “absurd red herring, which is not worth any comment or interpretation”, the North’s official KCNA news agency reported.

“The DPRK remains unchanged in its principled stand on the issue of ‘arms transaction’ between the DPRK and Russia which has never happened,” the North Korean spokesperson said, adding it was the United States that was “bringing bloodshed and destruction to Ukraine by providing it with various kinds of lethal weapons”.

DPRK are the initials of the North’s official name, the Democratic People’s Republic of Korea.

The Wagner Group was founded in 2014 when Russia seized and annexed Ukraine’s Crimea peninsula and sparked a separatist insurgency in Ukraine’s eastern Donbas region.

The United States estimates that Wagner has 50,000 personnel deployed in Ukraine, including 10,000 contractors and 40,000 convicts recruited from Russian prisons, Mr Kirby said.

Mr Prigozhin, a close ally of Mr Putin, said Mr Kirby had a habit of making statements based on conjecture.

“Everyone knows that North Korea has not been supplying any weapons to Russia for a long time. And no such efforts have even been made,” he said in a statement.

The Russian and North Korean UN missions did not immediately respond to a request for comment.

In November, after the White House said Pyongyang was covertly supplying Russia with a “significant” number of artillery shells, North Korea said it had never had arms dealings with Russia and had no plans to do so.

Ukrainians hail Zelenskyy after US visit

Ukrainians hailed Mr Zelenskyy’s wartime visit to the United States as a success, while Russian officials said on Thursday that it only fuelled the conflict.

Mr Zelenskyy’s trip included an Oval Office meeting with Mr Biden, a joint news conference at the White House and an address to a largely supportive Congress.

In addition to the $US1.85 billion military aid package, Ukraine also stands to receive an additional $US44.9 billion in US aid as part of a massive government spending bill the Senate approved on Thursday.

“We are returning from Washington with good results, with things that will really help,” Mr Zelenskyy said on a video message shared on Thursday night on his Telegram account.

He thanked Mr Biden and the US Congress for supporting Ukraine’s fight against Russia.

Neither Mr Zelenskyy nor any other Ukrainian authorities have confirmed if he’s already back in Kyiv.

“I feel proud of our country … for not being left alone on this difficult moment,” said Larysa Doroshevska, a 71-year-old Ukrainian retiree.

“I want to win so badly. I really want to defeat this darkness.”

Russian state TV sought to downplay the military and political support Mr Zelenskyy received in Washington, stressing in a news segment that not all members of Congress showed up to listen to Mr Zelenskyy’s speech.

Mr Zelenskyy landed in Poland on Thursday while travelling back to Ukraine, according to information he posted on social media.

He wrote that he met “a friend of Ukraine” on his way home.

A video showed him being greeted by Polish officials after leaving a plane.

He and Polish President Andrzej Duda hugged, exchanged greetings and then sat down to speak.